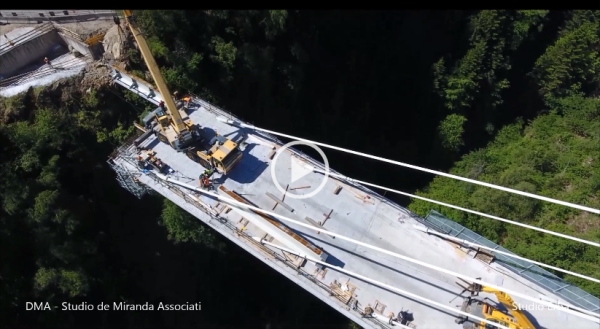 We are proud to announce that Val di Pai Cable Stayed Bridge is now completed and accessible to all citizens of the valley. Below is the story of the construction.

The cable-stayed bridge in Val di Pai, in the Italian Alps, is under construction: the casting of the mast is almost completed, as well as the assembly of its top steel element, and the assembly of the third segment of the steel deck structure is ongoing in these days.
The bridge, that overpasses a deep valley, will avoid cars to pass through a dangerous trench of the mountain roadway, and will also improve ski tourism in the area.
The bridge has a 46 m high concrete mast with Lambda shape, with a steel top and a tie-beam anchored in the rock side of the mountain.

In this VIDEO is shown the assembly of a part of the steel top of the mast and the insert of the tie beam.

The deck, has an initial trench that is curved in plan while the rest is straight, with a 118m central span over a 100 m deep valley; in these days are ongoing the assembly operations of the deck segments and the installation of the first provisional stay cables.
De Miranda Associati Consulting Engineers, in JV with Studio Erba, is responsible for the Full Design, Construction Engineering and Construction Supervision. The contractors are Cossi Costruzioni Spa and Omba; the stay cables are from Tensa.

118 m span on a 100 m deep valley, one inclined concrete mast, and a minimum jobsite space, crossed by an open to traffic road on a steep of the Italian Alps.
A logistic challenge and an acrobatic construction.

On 7th of July 2017 the bridge was tested  with 40 tons trucks passing on the deck, placed in order to create the maximum flexion and torsion on the deck; the maximum load has been 400 tons (10 trucks) in the 4 central segments of the deck.

The opening ceremony took place Saturday, 22nd of July, with the presence of the local authorities, that declared a complete satisfaction for the infrastructure, and for the safe and on-time completion of the works.

A big success for a bridge that is useful and appreciated from the valley’s inhabitants, who came numerous for the wished moment of the ribbon-cutting, and that are confident that the bridge will become a symbol for the valley, and will enhance its many attractions and beauties.